It has been reported that the European Commission is considering a ban on the use of facial recognition in public spaces for up to five years while new regulations for its use are put in place.

The reports of a possible three to five-year ban come from an 18-page EC report, which has been seen by some major news distributors.

Facial recognition trials in the UK first raised the issues of how the technology can be intrusive, can infringe upon a person’s privacy and data rights, and how facial recognition technology is not always accurate.  These issues have also been identified and raised in the UK, For example:

– In December 2018, Elizabeth Denham, the UK’s Information Commissioner launched a formal investigation into how police forces used FRT after high failure rates, misidentifications and worries about legality, bias, and privacy. This stemmed from the trial of ‘real-time’ facial recognition technology on Champions League final day June 2017 in Cardiff, by South Wales and Gwent Police forces, which was criticised for costing £177,000 and yet only resulting in one arrest of a local man whose arrest was unconnected.

– Trials of FRT at the 2016 and 2017 Notting Hill Carnivals led to the Police facing criticism that FRT was ineffective, racially discriminatory, and confused men with women.

– In September 2018 a letter, written by Big Brother Watch (a privacy campaign group) and signed by more than 18 politicians, 25 campaign groups, and numerous academics and barristers highlighted concerns that facial recognition is being adopted in the UK before it has been properly scrutinised.

– In September 2019 it was revealed that the owners of King’s Cross Estate had been using FRT without telling the public, and with London’s Metropolitan Police Service supplying the images for a database.

Google Calls For AI To Be Regulated

The way in which artificial intelligence (AI) is being widely and quickly deployed before the regulation of the technology has had a chance a to catch up is the subject of recent comments by Sundar Pichai, the head of Google’s parent company, Alphabet’.  Mr Pichai (in the Financial Times) called for regulation with a sensible approach and for a set of rules for areas of AI development such as self-driving cars and AI usage in health.

It seems that there is some discomfort in the UK, Europe and beyond that relatively new technologies which have known flaws, and are of concern to government representatives, interest groups and the public are being rolled out before the necessary regulations and risk management measures have had time to be properly considered and developed.  It is true that facial recognition could have real benefits (e.g. fighting crime) which could have benefits for many businesses and that AI has a vast range of opportunities for businesses to save money and time plus innovating products, services and processes.  However, the flaws in these technologies, and their potential to be used improperly, covertly, and in a way that could infringe the rights of the public cannot be ignored, and it is likely to be a good thing in the long term, that time is taken and efforts are made now to address the issues of stakeholders and develop regulations and measures that could prevent bigger problems involving these technologies further down the line. 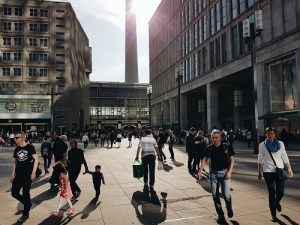